Mary Miller. The Rumpus. And an inadvertent, albeit ongoing, AWP round-up sort of thing. 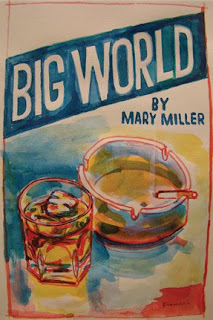 There are a number of AWP wrap-up type things flying around the internet that we are quite enjoying, though we have not quite been inspired to do one ourselves. Still, the experience of being there has been trickling into our communications over the last week and will probably continue to for some time after this. One of the highlights, maybe the highlight, of the whole experience for us was the endless swirling, twisting, chaotic hustle as we bounced from one writer or publisher to another, in some cases people we feel like we've known for some time, but had yet to meet in person, Ryan "Reynolds" Bradley from Artistically Declined, Dave Housley from Barrelhouse, yes that Barrelhouse, Michael Fitzgerald of Radiant Days awesomeness, or Caleb J. Ross of Charactered Pieces fame, long-time TBWCYL, Inc. favorites and friends such as Mel Bosworth, Scott McClanahan and S. Craig Renfroe, not to mention the Lindsay Hunter who may live right here in Chicago, but who we still never see enough of; newer acquaintances like Tom Williams of the soon to be published The Mimic's Own Voice, Dan Cafaro of the most triumphant Atticus Books, Chris Heavener from so kind Annalemma and Alan Heathcock of the so now, so hot Volt; writers new to us we can't wait to learn more about, Nik Korpon, Brandon Tietz, Amber Sparks, David Kiefaber and Matty Byloos; and then another sort of group, writers we admire, but have never met or corresponded with, and while there are many, one who made a huge impression on us was long-time TBWCYL, Inc. favorite Mary Miller the author of Big World who among others we had dinner with one night and who turned out to be as lyrical and captivating as her stellar short stories, all of which is a long way of saying we did our best not to be total fan boys when we met her, though we are, and while we probably would have mentioned here how much we enjoyed the interview we just read with her in The Rumpus at any time, what a different flavor it has after meeting her. So, please do check it out, enjoy the below excerpt, something we plan to quote and/or steal as needed and yeah, this turns to be a sort of AWP round-up anyway, go figure.

Rumpus: What is the gestation process like for your stories? Do they start with a character? An idea? A simile?

Miller: Never a simile, sometimes an idea, often a sentence. The narrator is nearly always a thinly veiled version of myself so this takes some of the question out of it. If the narrator isn’t “me” then it’s someone watching “me.” It’s a very narcissistic world I live in.

This is so, so sweet.

I felt like a loser inviting myself out to dinner with y'all...thanks for letting me tag along! It was the best night, by far. I didn't get drunk and I ordered a cheeseburger and ate every bit of it.