This Book Will Change Your Life - We Know What We Are by Mary Hamilton. And an interview. 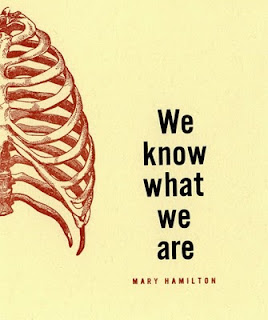 We have had the chance to not only read We Know What We Are by Mary Hamilton, but interview her as well at the Orange Alert. The collection itself is filled with blasts of sometimes surreal short fiction that is equal parts obsession, an ode to freaks and outsiders, sadness and celebration of pop culture as a filter for all that bangs around Mary's head. And the interview? Sublime, so please do enjoy the excerpt below.

I know for myself, that much of the time when I'm writing a story I will have some nugget of an idea and as I develop it I will wrap and interweave any number of my compulsions or obsessions into and around the story. Is that what you're describing here as well, or are you more likely to be obsessing about something and soon find yourself wondering what sort of story you might wrap around it?

It's the latter. Like with Egon Schiele, I read that he died of the Spanish flu shortly after his pregnant fiancee died. So that evolved into a story I wrote, not included in the book, about a person being consumed by the flu and then dragonflies while the bar below the apartment is being consumed by fire.

To choose an example from the book, I was obsessed with Goliath and being a giant so I wrote the Bull Shannon Goliath story. I was obsessed with the videos on YouTube about "circus freaks" so I wrote "We Know What We Are." It's almost always obsession first. Like with this new lightning obsession. I read, on Wikipedia of course, about a man who had been hit by lightning seven times and then died when he shot himself over an unrequited love. I mean, holy shit.

Email ThisBlogThis!Share to TwitterShare to FacebookShare to Pinterest
Labels: Mary Hamilton, Orange Alert, Rose Metal Press, We Know What We Are