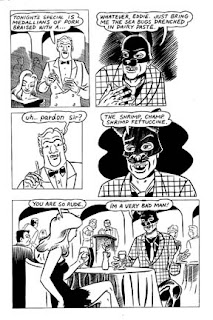 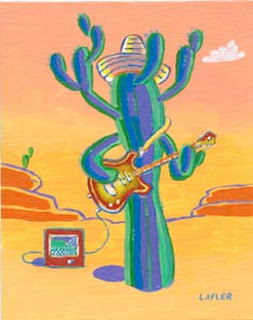 While we at Lucky Man, Inc. love to celebrate ourselves, we also love to celebrate our fellow artists, and with that in mind we recently reached out to Lucky Man publisher and graphic novelist Steve Lafler. Lafler is the creator of Dog Boy comics, the BugHouse series of graphic novels, and now 40 Hour Man which he co-created with writer Stephen Beaupre. Further, 40 Hour Man was released by Lafler's new imprint Manx Media - http://www.manxmedia.com/- which he created after working for several years with Top Shelf. I caught up with Lafler as he prepares to move on to new adventures and new digs in Mexico with his family, and here is what he had to say.

Let's start by talking about the Dog Boy comics - what do people need to know about these comics and what do they say about you?

I started drawing Dog Boy stories about a year out of college. After doing a daily strip for my college paper at UMass, I’d been messing around with the comic book format, looking to bring myself up to speed with it. As soon as I got a handle on comic pages vs. comic strips, I sat down and Dog Boy just happened, the material flowed like honey. I was working with an automatic writing/surrealist technique at the time, and Dog Boy sprang from my psyche mirroring the concerns of a young man making his way in the world: The search for meaning, for transcendent truth was primary. And of course, so was being broke, drinking beer, dropping acid and trying to get laid. Dog Boy back issues are available from Cosmic Monkey Comics at http://www.cosmicmonkeycomics.com/. I will do a collection someday, who knows when. Joe Sacco wrote an introduction for me, which will be in there.

And what about the BugHouse series, what prompted you to create a series focused on drugs, bugs, and jazz, and with Scalawag do you consider that series to be complete?

BugHouse would appear to be complete. It was such a rich vein of material, you never know for sure, but the bugs have been leaving me pretty much alone for awhile now. BugHouse was about addiction, and the artist’s life—trying to get to the top of the heap while not succumbing to your worst self. I was trying to draw myself sober (and leave my beer years behind) and I am happy to say, I’m no longer a practicing drunk!

Please describe 40 Hour Man and please talk about how you and Stephen Beaupre came together on this project?

40 Hour Man was written by Beaupre as the chronological tale of his journey through the various stages of blue collar employment, and his miraculous escape to the horrors of the white collar cubicle. It’s a very funny story, Beaupre’s writing has depth and is unique; he’s a very smart guy. We were publishing Buzzard comics anthology together in the 90s, and he proposed collaborating on the piece with me. As we’ve been friends since we were teenagers, I was very comfortable taking license to do whatever I wanted visually. We both had a lot of fun creating the book, and it shows. I tried to go kinda Mad Magazine with it, lot’s of over the top visuals and overt comic turns.

I know you worked with Top Shelf for a long time, what was that like?

It was great to have someone else pay the printer! Brett Warnock is a marvel, I know of no other person in comics with his enthusiasm and charisma. He’s also a lot of fun to party down with. Chris Staros is a ready steady editor; he has the ability to go direct to the heart of the narrative and keep you focused on the overall story arc; this is a very useful quality to an artist like me, who is paying a bit less attention to the overall glue holding the story together. I did three Bughouse graphic novels with Top Shelf and I’m very proud of them. I do wish that Brett, Chris and I had been able to put our heads together to figure out a way to sell more of them, but no one ever said that alternative comics was an easy biz.

Why did you decide to start Manx Media?

I wanted to take a crack at trade book publishing in my quest to perfect my skills at shoveling money out the door as quickly as possible.

Who among your peers are you a fan of?

Have you ever heard of Roy Tompkins? He’s one of the most raw, loose, sheer genius cartoonists that ever lived. He had a great series of comics called Trailer Trash on Tundra in the early to mid 90s, just amazing. The hero was the Hillbilly Bastard. Fucking Hilarious. We need more from ! Even better was his self published comic called Rot Gut from ’90 or ’91, it was the story of a fucked up young wanna be “player” who was sex crazed, and just flat out bonkers on acid or something, it was like Dog Boy on steroids, visually the most inventive comic book I have ever seen. It was as if Jackson Pollock and Paul Cezanne has mixed their DNA with India ink and splashed it on some paper. I shit you not. I love the work of the folks I came up with--Lloyd Dangle, Krystine Kryttre, Mary Fleener, Joe Sacco and J.R. Williams. Among the younger set, Craig Thompson of course is the master of the brush and just about everything else. But the kid to watch now is Austin English, check out his new magazine on Sparkplug called Windy Corner. is, I think, the most exciting young artist in comics today.

How as the comix scene changed over the years?

Well, what will become of print media? Who the fuck knows? It’s all You Tube now! Let’s schedule a video shoot! After indie/alt comics became established in the 80s with lots of post underground and strong narrative stuff (and Dog Boy in the mix), by the late 90s/early 00s it was all about form over content—“let’s design a nice package and sell it to the internet boom set!” Now, we hear that the graphic novel is ascendant in the book trade—HEY! book trade, could you please ascend over to my corner for my fifteen minutes please?! Fact is, well over half of all GNs sold are manga. It’s a dynamic, huge form. It’s influenced everything.

I’m not a manga guy myself, I’m more interested in developing my narrative storytelling tools in a personal, idiosyncratic way. I don’t want to attempt to follow popular trends, I prefer to dig my own tunnels to my own strange, personal mines.

I know you love The Cramps, and I'm not sure I have a question for you about them, but I would like you tell me what comes to mind when you think about them?

Besides Ivy playing her amazing chops and waggin’ her booty at the audience? Simply put, the most fun I ever had was the first time I saw the Cramps, on the summer solstice at the Warfield theater in – it was the “Stay Sick” tour. It was a full on occult bacchanal; I gave myself over to the pit and lost my mind. It was insanely fun and cathartic, shamanic healing at it’s best. And fucking hilarious to the core. Not only is Lux the King of Rock and Roll, he is the funniest man in .

Maybe you could tell us about Cat Suit as well, the new book you're working on - what's it about and what should we expect?

Cat Suit is my look at the mythos of the super hero--except for a couple pages in Dog Boy #5 I’ve never treated the subject. Why would some dude put on a skin tight suit and head out into the night? It’s completely ludicrous, and I show it as such. I don’t necessarily see it as a novel length piece, it’s at 42 pages right now and it can be downloaded as a PDF from www.stevelafler.net. The spring ’07 issue of OTHER magazine is running a ten page excerpt from it also. Currently, my plan is to start something new when Serena and I move the family to in three months. I’ll open up my mind and see what’s waiting there to greet me.