This Book Will Change Your Life - Belief Is Its Own Kind Of Truth, Maybe by the Lori Jakiela. 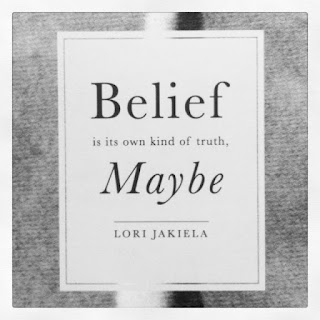 Whenever someone talks about writing, why they do it, or asks why we do, when they say they can turn it off, that it's not a compulsion, or when someone says someone's writing is brave or raw or authentic, we think, yes, maybe it's all of that, but there is also a certain kind of fact to the act as well - we don't have a choice, a flip was switched and now we write. It's what we're made to do. It's also what we have to do. And Lori Jakiela well understands that. She also understands something that can be harder for us to admit - whether we have to write or not, the very act of doing so, and seeing that work published, God-willing, means there is a physical reminder that we were here. That even if life itself does, or does not, matter, maybe we did, or that we were special, at least a little anyway. Which brings us to Belief Is Its Own Kind Of Truth, Maybe by Jakiela, a memoir that is an exploration of not just whether we matter, but what it means to be here at all. The question is whether we should now go and attempt to unpack the details of Jakiela's endlessly moving dissection of a life well-lived, and well-loved. Instead though, we'd rather spend a moment considering that life, and the idea that even having written a memoir it doesn't mean that Jakiela's life still isn't missing something. Truth certainly. But also the kind of stability that comes from knowing who you are. And not because you are self-aware - Jakiela is that - but because you know where you come from. Which she does not. Not really. It seems trite then to say that a book that speaks to power and truth and things not found is a page-turner, or a triumph, but it is. So instead let's say this - during a moment where a handful of truly exceptional memoirs have been released which travel in memory and fragment, moments of flash and questions of truth - and yes we are thinking of Excavation by the Wendy C. Ortiz and This Must Be The Place by the Sean H Doyle in particular - Belief Is Its Own Kind Of Truth, Maybe is still something kind of magical. It is also sure to change your life, as it has ours.
Posted by TBWCYL, Inc. at 10:39 PM

Email ThisBlogThis!Share to TwitterShare to FacebookShare to Pinterest
Labels: Belief Is Its Own Kind Of Truth Maybe, Excavation, Lori Jakiela, Sean H Doyle, this book will change your life, This Must Be The Place, Wendy C Ortiz