More embarrassment. More awesomeness. You Can Make Him Like You. Pre-order madness. 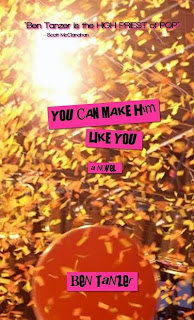 And there it is, The Hold Steady-inspired You Can Make Him Like You from Artistically Declined is ready for pre-order to be shipped on or before April 11th, and that includes free shipping might we add, hence the ongoing embarrassment and the awesomeness. We know some of you already have copies, others know all this, and some of you have even already been hyping it, thank you, but with the pre-order officially on, we would really appreciate it if you would tell every person you’ve ever met, ever, anywhere, life coaches, bus drivers, gym teachers, therapists, etc., about this, maybe plugging it on your blogs, the Facebook and Twitter, and adding it at Goodreads as well if that's your thing. Thanks in advance for the support and interest, and for your reading pleasure we have included a brief synopsis below, as well as, a recap of some of the early reviews. Big thanks. And big hugs.

You Can Make Him Like You, Tanzer's third novel is an adventure in being a grown up, in facing relationships and jobs, friendships and parenthood. A true exploration of what it means to live in our world, saturated with pop culture in the midst of real life struggles.

"The always awesome Ben Tanzer knocks it out of the park yet again with his upcoming April release You Can Make Him Like You. The novel, published by Artistically Declined Press, beautifully captures the chaos and confusion of marriage, friendship, family, and the decision to have a child." Lori Hettler, TNBBC's The Next Best Book Blog

"It makes the incredibly difficult process of developing and maintaining a character arc look easy and graceful." David Kiefaber, Banners of Death

"Tanzer, in a manner most mysterious to me, somehow harnesses the power of straight, conventional writing without the usual level of pandering or expositional obtuseness. The words say exactly what they mean, no more and no less, and thus his books drive us forward - we become propelled." J.A. Tyler, Red Fez

Email ThisBlogThis!Share to TwitterShare to FacebookShare to Pinterest
Labels: artistically declined press, You Can Make Him Like You