"Tanzer writes his characters... with incredibly depth and honesty." You Can Make Him Like You gets Vouched. And likes it. A lot. Also, photo action.

Really thrilled by these kind words for You Can Make Him Like You from the Vouched and recent TBWCYL, Inc. favorite, and now bestest BFF ever Amber Sparks. Drinks on us for sure when next we meet. As for the rest of you, how about some excerpt, and some photo from the terrific You Can Make Him Like You discussion we had last week with always easy on the eyes pop culture critic and long-time TBWCYL, Inc. favorite David Masciotra at The Book Cellar, who we also owe big thanks to, and will also be buying drinks for soon. And yes we know its a book store, The Book Cellar that is, not David, though we are happy to buy drinks for both.

"What makes the book work so well is the way that Tanzer writes his characters, particularly Keith, with incredibly depth and honesty. Like all of us, they are diffuse and distracted and shaped not only by important events (babies, elections) but also by pop culture, by music and movies and sports trivia and TMZ. Tanzer is willing to acknowledge that sometimes, even during the most difficult moments of our lives, we may be thinking about the most trivial things imaginable–and that it doesn’t mean WE are trivial. It merely reflects our culture, our methods of coping, our way of floating out of the world even while fully immersed in it." 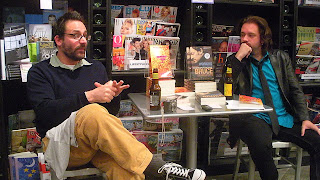 Email ThisBlogThis!Share to TwitterShare to FacebookShare to Pinterest
Labels: Amber Sparks, david masciotra, The Book Cellar, Vouched, You Can Make Him Like You

I like that picture, looks like you're going through a Rivers Cuomo-I'm Recording an Album Beard phase. Awesome.

Thanks bro, though if we could just get that River Phoenix thing going, then we would be most set.

No, we were more focused on his look, and looks, in this case, because if we need to go Rivers Cuomo or River Phoenix, and we're not saying you do, but if you do, we're all River Phoenix all the time. And yes, we're dating ourselves.